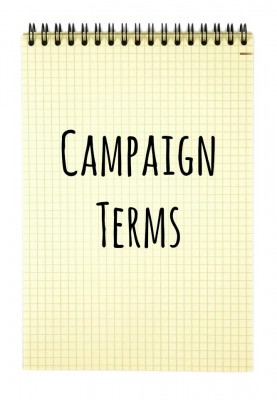 Learn Your Campaign Terms: Staying on Top of a Campaign Dictionary Can Be Hard

Staying up to date on a campaign dictionary can be exhausting, so we have compiled a list of useful campaign terms to keep your lingo up-to-date, enjoy!

Field organizer: Field organizers are the people in charge of finding, training and managing volunteers and workers involved in a campaign. They are important because they make sure your field operation runs smoothly and that volunteers are reaching the right voters.

Vote goal: Simply put, a vote goal is the number of votes you need to win your election. With this goal in place you know how many voters you need to convince to turn out to the polls in order to win the election. By consulting the local board of elections you can see the history of voter turnout in your area and the number of registered voters then quantify what your voter goal should be.

Targeting: Targeting can come in many different forms, from targeting your direct mail to targeting your digital media. Overall, targeting consists of looking at your whole universe and then narrowing it down into groups to effectively communicate with the people you are trying to reach.

Persuasion: In campaigns, persuasion consists of targeting undecided voters and persuading them to vote for you in the election, essentially moving them from undecided to decided.

SMS: Better known as text messaging, SMS  is a good term to add to your campaign dictionary. People are increasingly turning to mobile phones to communicate, so tapping into this social engagement is important for your campaign. SMS’s have an increasingly high click through rate and higher rate of engagement that can be tapped into on a campaign.

CPA: CPA stands for “cost per acquisition” campaign, where, unlike traditional digital advertising, adds people to your list through taking actions on your behalf. CPA lists are more valuable to your campaign because they are on average more engaged and proactive targets.

CPC: CPC stands for “Cost per click“ advertising. CPC is when an advertiser pays the publisher for the clicks that the ad they are running receives. These campaigns are great for attracting visitors to your campaign page and tracking the exposure the ads are getting.

Base vote: The base vote refers to the voters who will always turn out for a specific party. Mobilizing your base voters is crucial to a campaign because these are the people who will back you no matter what and encourage others to turn out and vote for you.

Voter file: Democratic candidates have access to great voter files through their state parties. A voter file will provide you with a list of registered voters to use when targeting your communications or for GOTV plans.

Media commission: Most advertisers charge a media commission for providing their services. These commissions can range up to 15% and should be carefully factored into your budget along with any media costs.

Swing voter: Unlike base voters, swing voters will not be loyal to a candidate just based off of party lines. A swing voter cares about the issues and could vote Republican or Democrat. These voters are important during your campaign, because they can make or break meeting your voter goal and win the election.

Voter ID: Voter ID is a controversial topic in recent years. Each state has a different policy on whether or not voter ID is necessary and what kind of ID will be accepted. Be aware of these rules and communicate them to your voters to make sure they have the resources necessary to vote for you.

Benchmark poll: A benchmark poll is typically a poll that is taken before a candidate announces their decision to run for office. It gives candidates a snapshot of where they stand among voters and what their strengths and weaknesses could be in a campaign. Furthermore, it provides a baseline for a campaign to identify what target groups will support and vote for the candidate.

Tracking Poll: Tracking polls are more complex and involve polling at regular intervals to show a trend or level of support a candidate has over a period of time.

Brushfire poll: Brushfire polls happen in between benchmark polls and tracking polls and usually determine how competitive the race is going to be. These polls can be used for many different things, ranging from assessing support, trying different messages and testing possible attack messages that could be used against the opposing candidate. Overall they are a great tool for building a campaign message and strategy.

Focus group: Focus groups are invaluable to campaigns. Focus groups provide insight on how different strategies, messages or targeting plans will work by consulting actual groups of people. Focus groups will also provide you with the best strategies for communicating and mobilizing undecided voters.

Dial test: A dial test is a specific kind of focus group where people rate their feelings on a dial, giving numerical value to the findings of the focus group. This can be a great way to assess the scope of how people feel about a candidate and their message.

Caucus: A caucus is a group of politically like minded legislators from the same political party. Caucuses will often come together and select candidates from within their party to run for office. Having the backing of your state caucus is valuable during an election.

Primary: Primary elections are used to narrow down the amount of candidates running for office. Primaries give the voters a chance to decide who the best candidate from their party is, giving that individual an opportunity to run in the general election.