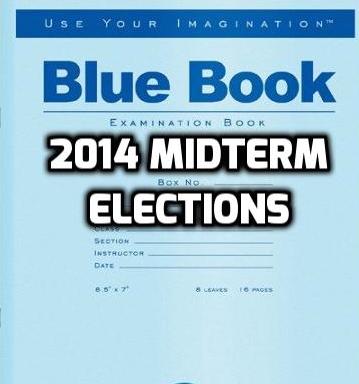 Our Take on the 2014 Midterm Elections

We can't be ahistorical
Many historians after the election said a wave like this has happened many times before and was likely to happen. As a party, and as a nation, we often operate without any historical perspective to what is going on. And few understand if we are bucking history, or following a bad trend that has happened before. I disagree with the notion that this wave was going to happen during the mid term elections of 2014 and there was nothing we could do about it, but it is obvious that we didn't do enough to stop it. The midterm elections were close. The wave has overshadowed the fact that in many races, the margins were very thin and some Republicans barely held on (some Dems too.) This was a close election.

Tactics alone don't win elections
As Democrats, we have better tactics, ground game, technology, etc. But having good technology and good campaign skills are not enough to win elections. Regardless of what we think of Republicans, and how much has been reported about infighting in the Republican Party, they are still more disciplined as a party than us.

We can't rely on the mistakes of the opponent as a pathway to victory
This cycle, the Republicans learned their lesson from cycles past and had more disciplined candidates running for U.S. Senate, and when they saw problems they fixed them. Over the past cycles, we have gotten lucky with Republicans in U.S. Senate races imploding at the end. We obviously cannot rely on that now or in the future to fix our problems.

Money does matter
We got outspent by both campaigns and by super pacs. Republican Senate candidates outspent Senate Democrats by $15 million. House Republicans, on the other hand, raised and spent $100 million dollars more than House Democrats. Current projections show total spending to top the $3.63 billion spent in 2010. Unless the system changes, we can expect this in the future.

Polling is not as predictive as it used to be
It seems that the end of election campaigns becomes “beat up on pollsters” season. The midterm elections were not no exception but I am not going to do that. My view is that we have over-relied on polling in the past that is not the fault of the pollster. I think polling is part of the picture, but you need to have a complete perspective of what is going on, and some things, like amplification of message via big money spending cannot be predicted in a poll, no matter how good the pollster is. Timing matters too. Every year, some campaigns and organizations make spending decisions later and later. Some think due to technology and modernization we can all do things faster than before, but this is a reactive strategy. To win political campaigns - specials, presidential and midterm elections we need to be proactive. Planning can be one on the hardest exercises for campaign and organizations, but it is one of the most important. Welcome to national elections on the local level. In some places we were able to win by focusing on local issues, but this strategy used to work better than it does now. In  State house races we saw mail saying the Democratic candidate would be a rubber stamp for Obama in the State House. Although not a logical argument, this simple message worked from an emotional perspective.

Turnout does matter. So does motivation.
Many programs tried to get folks to turnout this year, but until we focus on how to persuade and motivate mid-term voters, we will continue to have these issues. We also need to understand that if we are not giving our base good reasons to turnout, they won’t. According to the numbers, turnout dropped from 40.9% in 2010 to 33% in 2014. The biggest surprise was the large decrease in millennial turnout, from 19% in 2010 to 12% in 2014, and the increase in 65+ turnout, which rose by almost 10% between 2010 and 2014. It's hard to judge the size of the wave from the ocean. Finding perspective is not easy when you are deep in a campaign. You cannot always see the big picture and what is coming. I heard many folks say, “I thought it would be bad, but not this bad.” It was a bad year, but our work is needed now more than ever to give people a reason why they need to vote for progressive candidates.

Here is some more analysis of the 2014 midterm elections in one place:

The Washington Post - "The GOP Won, But the Gender Gap Just got Bigger"

Slate - "Why the Economy Motivated Angry Voters... In a Recovering Economy"

The Take Away - "Post-Midterms, the Future of the American Parties"

The Daily Beast - "How the Lame Democrats Blew It"

NBC News - "Where Were All the Dems?Here's Who Turned Out to Vote"

Democrats can win presidential and midterm elections. but nothing is a guarantee. in order to win, we need to learn from the past have a national message that motivates and persuades. Have questions about the 2014 midterm elections? ask them here: