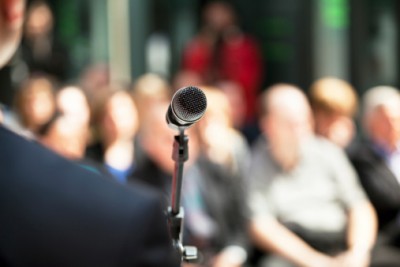 Can public speaking with vulnerability be a good thing? Every time I do any type of public speaking, I get nervous. When I was younger and I was nervous, I would stutter. Even today, I sometimes hear myself repeating a word as I get animated. Throughout my life, I work hard to conceal these flaws, but the reality is that it is a part of who I am. And I'm hardly alone. It’s a natural instinct to be nervous in public speaking and something that many of us can relate to. When I’m speaking, my nervousness and vulnerability is part of what makes me real and relatable.

The other day I saw a friend give an amazing talk. In the middle of her discussion, she revealed to the crowd she was nervous. As a result the crowd became more engaged and connected than ever before. They were rooting her on and as soon as she disclosed her nervousness, things got even better. She killed it.  The fact that she admitted to being nervous actually helped her to become more relaxed and connected to the audience. And as a result, the audience responded to her vulnerability and connected with her.

Have questions about public speaking with vulnerability? Ask them here-