What is power mapping?

Power mapping is a very useful advocacy tool especially when you and your organization have limited time and resources. Power mapping can be used to target the key decision-makers or influencers needed most to achieve policy wins, allowing you to map those with voting and decision-making power over an issue you are advocating for.

The origins of the power map are hard to pinpoint, but organizers have been using it for decades to run more effective campaigns. Ideally, your power map will reveal to you connections and power dynamics between your targets, which will allow you to create a focused and efficient advocacy campaign strategy.

How to use power mapping: It is critical to complete the power map BEFORE you plan out your strategy, including how resources are being spent. Using time, money, and people on the wrong targets often result in a failed campaign.

From the beginning, be very clear on what you are trying to achieve.

Make sure that your goal is clear and measurable – meaning it will be evident whether or not your campaign is successful. For example, a clear indicator that you accomplished your campaign goal would be if the legislation you advocated for was indeed passed.

Like any good plan, research must be done to determine who actually has power over your issue. These influencers are usually the members of the council, committee, assembly, legislature, etc. who can cast a vote in favor or opposition to your goal. You will also want to list institutions or organizations, and the specific individuals within them, who have a stake in this issue. This will help you determine the target(s) who will be at the center of your advocacy efforts. 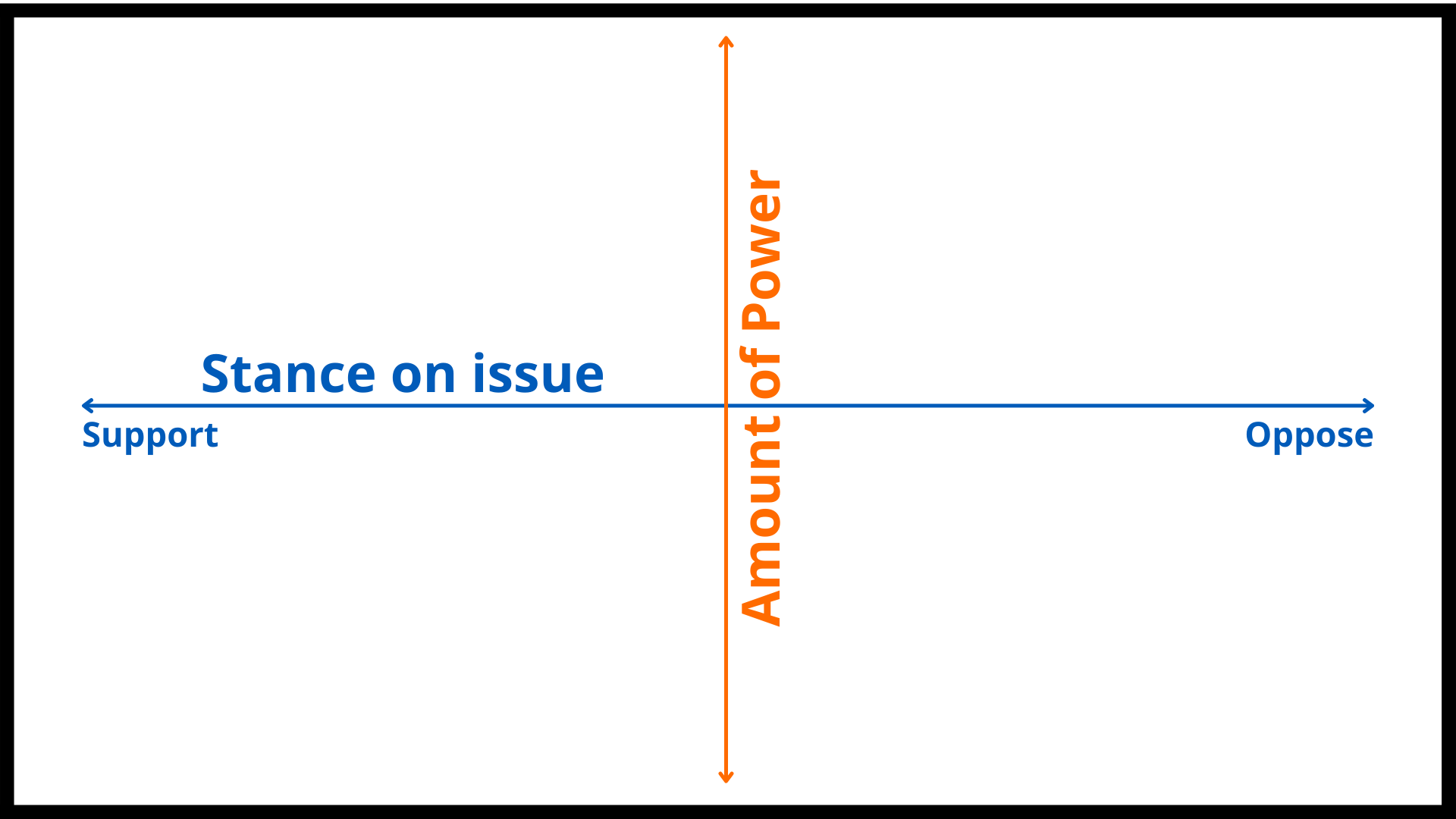 Vertical Axis – on the vertical axis you will plot your targets based on the level of power they have to make a consequential decision on your issue.

Horizontal axis – on the horizontal axis you will plot you target based on the level in which they support or oppose your stance on the issue.

Who goes on the map?

Once you have done your research it is time to start mapping.

Decision makers – First you will want to start by placing on the map the targets who have actual decision-making power to influence the outcome – i.e. ones who can cast a vote. Determine their placement based on their level of power and stance on the issue.

Influencers – Once all the decision-makers are placed you can now place people or organizations who have influence over the decision-makers. They might not be able to cast an actual vote, but they have a relationship with someone who can place a vote.

Now it’s time to take a step back and look over the map. Make note of your allies and opposition and the amount of power both sides possess. The goal will be to move the targets up on the power axis and to the left on the support axis. Now unless you have unlimited time and resources, you will need to focus in on which targets are actually needed to achieve the goal. This will likely result in solidifying support amongst your allies in addition to other influencers and leveraging these connections to move targets who are neutral (or in the middle) to your side.

For example, if a city council has five voting members then it is safe to say at least three are needed to pass a piece of policy. Now say after putting everyone on a map you notice you have two councilors with you and two against you and one who is neutral. You would want to spend some time with the two councilors who are with you to build up their power. And, the rest of your time and resources speaking with other influencers to help you move the neutral councilor to vote with you.

Now this map will help determine the most effective place(s) to spend your time, money and people. AND you should then choose a strategy and tactics best suited for the targets selected. Not all tactics will work on every target, so use the information gathered to focus your energy on the ones that will move selected targets to your side.

Don’t throw away your map!

This map is a living, breathing document. Keep coming back to it throughout the duration of your campaign. When you have more information, if power shifts, or you are at a critical junction in your campaign, you will want to consult and update your power map. The more information you can add to it, the better your targeting, strategy, and tactic selection will be!