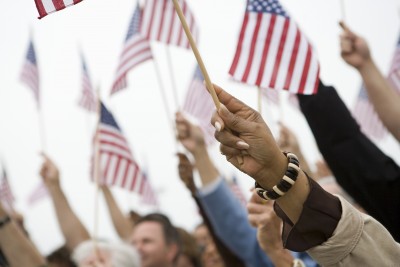 How I Learned Grassroots Campaigns from the Master

Every Fourth of July, I think about my former boss, Congressman Jim Jontz. Jim taught me the importance of grassroots campaigns - real conversations, and knocking on doors. Jim was a congressman from Indiana’s 5th district and a progressive legend. In his first campaign, he won a state representative seat by 4 votes. He went on to win a state senate seat by less than 100 hundred votes and three congressional elections by less than four thousand votes total. He was my mentor and teacher in the world of grassroots campaigns.

I, along with many future campaign operatives, got my start in politics by doing field work for Jim Jontz in a rural Indiana district. There, I spent six months of my life organizing volunteers and knocking on doors and got a great apprenticeship in how to run grassroots campaigns.

On the Fourth of July in 1990, Jim set what I believe to be the world record for the most Fourth of July parades attended in one congressional district by a candidate. Jim went to nine different parades that day, with six of them all beginning at 2 p.m. In addition to his door-to-door canvassing, Jim was famous for riding a bike in parades. I remember that he was lectured at a parade in Rochester, Indiana one year about staying in parade formation. He had started the parade as float number 24, but by time he was done, he was float number 5, right between the Ladies Auxiliary and some overly enthusiastic Shriners.

For the Fourth of July in 1990, we had four bikes strapped to different cars in preparation for the nine parades. Jim would fly to each parade on a prop plane and land at “airports”, which were often just grass strips. He would then-then drive or walk to the parade route and hop on the bike to be in the parade. There, we would have volunteers handing out literature and trying and keep up with Jim, but they never could.

At each parade, Jim would meet with everyone, shake hands, and leave the bike at the end of the route. After each parade, I would strap his abandoned bike to my car and take it to the next parade. The parades in Logansport, Peru, Chili, Twelve Mile, and Rochester were all in my area that day, but the second to last parade of the day was in Crown Point. I drove to that parade even though it was not in my area. It was a haul and the parade was spread out over a really long route, mostly uphill. During the parade, the chain on the bike broke and I convinced someone to lend Jim his bike to finish the parade. He was rewarded with shirts. It was a very cool day.

Although the parades were fun and there were a ton of other parades and county fairs, door-to-door canvassing was my primary job.

The door-to-door program was less sophisticated than today’s programs but it was way ahead of its time. Real, unscripted conversations happened with voters on a daily basis. Canvassers were trained to talk about a wide range of topics, and engagement happened in a genuine and real way.

Jim’s campaign utilized this door-to-door strategy across a massive district that went from Kokomo to Gary, with four full-time organizers and a dedicated group of volunteers. Television and direct mail were important, but the real relationships Jim had built at the door were what kept him ahead of the competition.

What I learned from Jim’s door-to-door strategy, and from his campaign style in general, is that real relationships matter and no matter how hard the fight, genuine interactions will pay off. Jim was a master at connecting with people. He had a way of knowing how to reach someone and what to say.

Jim also never took himself too seriously. The first time I met him he was raising money by letting folks throw sponges at him. He was open to any conversation, a bbq, a photo, a handshake, or a joke. Regardless of where it was, Jim could make a connection with you. Party did not matter. Democrat, Independent, Republican, he was there for you.

Jim Jontz died of colon cancer in 2003. But his legacy lives on in the lives he touched, the legislation he championed, and the people he taught. We miss you Jim.

Have questions about grassroots campaigns drop us a note.