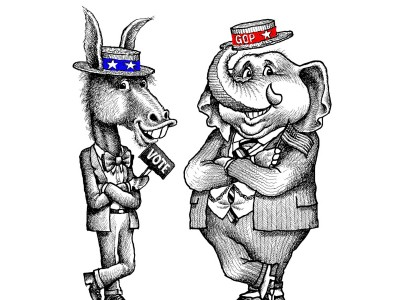 As a Democratic consulting firm, we are frequently asked if there is a partisan difference in political direct mail. The short answer? Not really.

Of course, there are vast differences when it comes to message, but regardless of party, both sides use similar strategies to reach voters. From a design, creative, and targeting standpoint, there is little disparity between Democratic and Republican direct mail.

In fact, if you notice major differences between any two pieces of political direct mail, message aside, those differences are likely indicators of quality rather than partisanship. Mail pieces that are done well will be much more similar to each other than any number of pieces from the same side of the aisle that have differing quality levels.

The best firms from any party (or no party at all) will use similar elements in their mail pieces. They work to create strong contrasting messages—a key component when it comes to political direct mail. After all, when you boil it down, elections are about choices. It is critical for your mail piece (as well as you candidate or cause) to stand out. No matter the political leanings of a piece, it is important to boost your contrastive message by using creative that jumps out and entices people to read it. This includes attention grabbing photos and headlines, as well as clear, concise copy.

Good direct mail, whether Democratic or Republican, draws the reader in and connects on an emotional level. Direct mail, when used correctly, makes an impact. When it lands in a mailbox, it will be noticed and read. Bad direct mail is easy to spot. It is often filled with far too much copy, vague messaging, and unappealing photos and graphics.

When direct mail is done correctly, partisan or not, it is concise; trying to cover too many issues on a mail piece is going to leave voters remembering very few (or even none) of them. Using short copy and creative ideas that are relevant to the needs of voters will create direct mail that jumps out of the clutter of the mailbox and into the mind of a voter.

Just as important as clear and impactful design in good direct mail is targeting – i.e. which voters are receiving the mail. Political direct mail is far more targeted than many other kinds of communications efforts used by campaigns. For instance, billions of dollars are spent on local television and newspaper ads that reach thousands of voters at a time but not necessarily the right ones. Many people who drive by yard signs may not vote or not even live in a candidate’s district. Political direct mail reaches voters on a personal level which typically makes it more effective.

Targeting is key in keeping a campaign within budget, especially when it comes to political direct mail. Remember, each piece of mail comes at a cost, and regardless of party, both Democrats and Republicans have budget limitations.

When figuring out to which voters to target, it’s important to look at past voter turnout and history and work with a consulting firm to make an informed assumption on who will vote this time around. These are the folks to target in a direct mail program. Not thinking about voter turnout is a classic mistake campaigns make.

After working so hard to pull together a well-designed piece of political direct mail, newcomers are often tempted to mail to every eligible voter in their district. However, since many people who could register to vote don’t and many who are registered don’t end up voting anyway, the amount of likely voters shrinks dramatically. This is one place where party plays a big role: a mailer detailing specifics of a very progressive candidate should not be sent to a household with an extremely conservative vote history.

Targeting is a place where Democratic direct mail consultants have excelled in recent years, due in no small part to investment in a lot of data targeting infrastructure. This investment has allowed Democrats to more accurately target potential voters so that they are communicating with those most likely to show up on election day. Technical campaign advances are a swinging pendulum though, and Republicans are working hard to catch up and create their own infrastructure that is as good or better than their Democratic counterparts.

All-in-all, the differences between Republican and Democratic political direct mail are minor. The obvious big one is the message of a direct mail piece. Other than that, though, the design, creative, and targeting aspects of a political mail program, if they are employed correctly, are essentially the same. While this might seem surprising at first, it acts as a nice reminder that no matter which side of the aisle you stand on, we all have a lot more in common than we have dividing us.