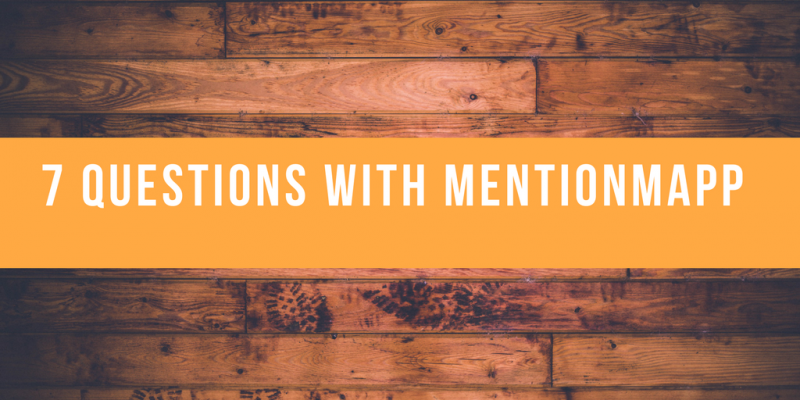 Mentionmapp is a digital campaign tool that allows you to map connections between Twitter users to visualize who’s saying what and who they’re saying it to. Mentionmapp can help you keep track of your brand and figure out who’s engaging with your content. We talked to co-founder and CEO John Gray about his digital campaign tool Mentionmapp, as well as larger trends such as the proliferation of Bots and misinformation.

1. What inspired you to create Mentionmapp?

2. Who can benefit from using Mentionmapp?

Communications professionals with diverse needs can benefit, from public relations, marketing, and non-profit organizations to journalists and people in the OSINT (Open Source Intelligence) community. People are using Mentionmapp with an interest in aligning content or connecting their campaigns with the right audience, finding influencers, seeing events unfold in real time, verifying sources, and getting a dynamic picture of who is active in any conversation online in any given moment.

3. What considerations are important for folks to make in looking at who is engaging with their content on Twitter?

Is our content resonating and who is it resonating with? Is engagement simply about accumulating vanity metrics (retweets, likes, followers), or is an engaged audience one that takes action? Is our content eliciting a reaction, generating different perspectives from people who are genuinely open to gaining new knowledge? Or, is our content a potential magnet for trolls who are adding no value to the discourse? Most importantly, when considering a reply, pause and verify who you’ll be talking with. Are they a real person? Are they actually connected to the topic? Research and then reply. Our digital campaign tool Mentionmapp operates by the mantra: “Never feed the trolls, and don’t talk to Bots.” This article from First Draft News highlights four case studies in verification for news, but has lessons for us all to consider.

4.  Your BotMapp digital campaign tool shows how Bots operate on Twitter. How common are Bots and what role do they play across the Internet?

First, it’s important to qualify that not all Bots are bad. But, it’s deliberate deception that is cause for concern. We’re seeing Bot operators getting very good at creating fake profiles. Bot “personalities” are evolving. They’re more than the “gray-eggs” (profiles with no picture), those with multiple digits populating their Twitter names like @TanyaBr62551176, or the Cyborg Bots that are tweeting at inhuman rates (100 tweets and more per day are a significant red flag). Many profiles we’re finding easily pass the “at a glance eyeball test” in that they look very real. It’s a complex challenge to determine which Bots have a deceptive presence, and it’s why Mentionmapp is deliberately vague in sharing details about our process and have no plans to make BotMapp publically available – we don’t intend to help the Bot operators. We also don’t see technology on its own solving this issue.

From our research, the problem is more pervasive than many people appreciate and the platforms themselves want to admit. This is not just a Twitter issue – it’s a cross-platform issue plaguing Facebook, Instagram, Reddit, YouTube, LinkedIn, and comment forums. We’re seeing the proliferation of an overall ecosystem of fake (fake profiles, fake news sites, fake organizations and businesses, fake charities), where the Bots play a key role in gaming the metrics that subsequently drive what populates our feeds. By influencing what the platform algorithms push into feeds, Bots are unquestionably an important weapon behind any misinformation campaign. Bots are also driving clicks for cash (ad fraud), propagating links laden with malware, and pushing phishing operations, all of which undoubtedly help fund Bot creators, network operators, and content creators.

5. What are some of the larger consequences of the proliferation of Twitter Bots?

As social media is now the media (let’s drop the social part), the consequences of Bot activity are numerous. They are key drivers of computational propaganda. They are operating to manipulate public perception and opinion connected with any of today’s important socio-political issues.

Bots are effectively amplifying misinformation, dampening dissent, and driving people out of conversations, all of which isn’t new. We don’t have to look any further than Syria (2011), Turkey (2013), Mexico (2014), or Spain (2015) as examples of state actors or their proxies using Bots to impact sociopolitical conversations.

Our digital campaign tool has documented Bots waging what are essentially DDoS attacks (overwhelming sites with traffic), such as a recent example with five ProPublica journalists and the Open Society as the targets. Imagine waking up one morning and finding you’ve attracted 12,000 new followers and that one of your tweets has earned the same number of retweets. This is exactly what happened to security expert Brian Krebs, who sees it as a deliberate intimidation tactic.

In a more abstract sense, the overall social impact of misinformation is eroding people’s confidence in the veracity of facts and the value of reasoned debate. Trust in our public institutions (media, government, education) is being undermined, and Bots are contributing to the disturbing trend of making opinion mean more than knowledge and substituting dogma for truth.

6. The 2016 U.S. election showed the power of fake news in influencing campaigns and elections. How can political campaigns combat misinformation?

Misinformation certainly isn’t a new problem in politics, but combining computational horsepower, massive amounts of data, and granular audience targeting, along with the volume and velocity by which information travels, is making it a more complex problem. I’m humbled that you ask, but it’s a question a lot of other smart people around the world are working to answer, and I’ll not pretend to have the answer myself. Part of the solution will emerge when people in politics quit living by what pollsters say, start crunching less data and begin listening to more real people. Real human engagement means seeing people as more than data points. There’s much more insight to be gained beyond counting likes, retweets, and upvotes.

7. How can we all work to be better consumers of news and other content on the web?

Read more; diversify and broaden your perspective and what you’re reading (and watching and listening to); get beyond confirming your own bias. Share less while being more selective with what you’re sharing (are you adding to the noise?). Verify more and see how multiple sources report on any given event or issue. Ask, why this story is taking off? Does the source have a track record of stories generating hundreds or thousands of likes or retweets? If we choose to seek more genuine discourse (defined as a “verbal interchange of ideas”) and to sow fewer seeds divisiveness, there’s hope for a more meaningful human experience.

“The first principle is that you must not fool yourself – and you are the easiest person to fool.”

Thanks so much to John Gray of Mentionmapp for answering our 7 questions!