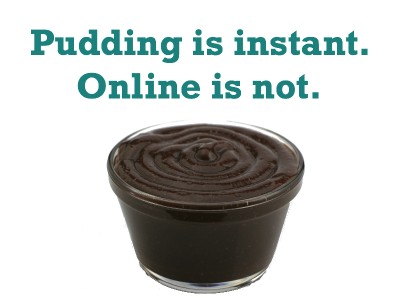 Fast and Instant Are Different

While it’s true that the world of online advertising is fast-paced, and it certainly gives us information much more quickly than any other medium, banking on instantaneous traction is a good way to fall short of your goals.  This is because online advertising is not a synonym for instant. Planning ahead will give you time to really define your goals and make sure your campaign has the right components and the right timeline to achieve them.

Where some sites, like Facebook, get ads up and running quickly with very little turnaround time, others, like Google, have an internal review process that can sometimes take a couple of business days.  If you’re trying to run a online advertising campaign that lasts a week, and you’ve only given yourself 24 hours lead time, you will end up eating into some of that run time.

What’s more, if you look at a basic graph of the progress of most online advertising campaigns (whether you’re looking at clicks or impressions), you’ll find that the first few days or even weeks are a time for building traction.  In other words, it’s extremely unlikely you’ll have a high volume of clicks and conversions within the first few days of going live.

The same principal applies to Facebook likes.  If you already have a wide audience for your page, advertising and increasing those numbers can indeed be a fairly quick process.  If you’re starting from scratch, however, those numbers take more time to build.  One of the most effective ways to advertise on Facebook is to serve ads to the friends of people who’ve liked your page. If you don’t have a critical mass of followers, those ads aren’t really an option.

That ramp up time also means that a shorter buy is less likely to give you what you want.  This doesn’t mean that it’s always a bad idea to be up for just a week, but I’ve had people come to me wanting to buy for two days, which, unless you’re Barack Obama’s campaign, is likely to be far too little time.  If you have the time to play a longer game online, it’s often a good idea.

If you know that you have an important date coming in three months, and that you want to run ads around whatever that date/event is, start talking about it now – don’t wait until a week before to get the ball rolling.  That lead-time will allow you to manage your time and resources in a way that will be more efficient and effective when it comes to achieving your online advertising goals.