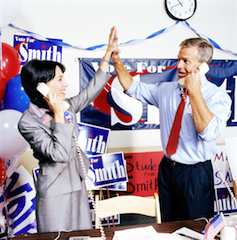 One of the roles I enjoy most  is teaching folks how to run for office and run campaigns. Any campaign training we run usually starts with essential political consulting advice on the three key resources of a campaign. The three main resources you have in any campaign are people, time and money. Below are descriptions of each of these three critical campaign resources.

People -  We all wish we could run a campaign of presidential proportions with volunteers streaming through the doors, but 99.9 percent of campaigns are not like that. You need to make sure you volunteer recruitment numbers have a basis in reality. You need to recruit and organize volunteers every step of the way. Even the most grassroots of campaigns are lucky to find volunteers that come back more than once, and it takes time to build a base of super-volunteers. So don't get discouraged when your campaign is not met with an army of volunteers and a marching band. It takes time and a lot of hard work. Key political consulting advice: recruit twice the amount of volunteers you actually need. Some folks call this the rule of halves, I just call it being prepared.

Money - You will need to spend a lot of time raising money.  Money will not flow to you just because you have announced your run for office, and it will not come to you just because you have the Democratic nomination (or Republican either). Raising money takes hard work and you will spend a lot of time calling friends and family. That’s right, your friends and family members will be the ones funding your campaign. It is not the case that a cadre of political givers who you have no connection to come out of nowhere and write you big checks. Other people are only going to invest in your race if you have raised money from your friends and family first. Even then, the majority of your funding will come from people with whom you have some prior connection. So be prepared to do 4 to 6 hours of call time daily.  Political consulting advice: make a spreadsheet of your potential givers before you run. If you can't find 20% or more of the total you need to raise from friends and family on a assessment spreadsheet you may want to to rethink running.

Time- You will never have enough time and you cannot get it back once it is gone. You need to organize your life to make every day on the campaign count. Whether you are raising money, knocking on doors with volunteers or meeting voters, the time you have on a campaign is finite. Every year someone tells me they would have won their race if they had a few more days or weeks. Without fail, the campaign had plenty of time, they just did not use all the time they had. Political consulting advice: Create a campaign calendar when you write your campaign plan. Have a big picture understanding of the lack of time you have.